The word Millennial has received an unfairly bad reputation. The truth is that Millennials already make up 30% of existing workforces and will make up 75% of the global workforce by 2025. What does this mean? Well, in order to hire and retain talent, it’s important to understand what motivates millennials specifically. Baby boomers and other older generations are retiring, and our workforces are getting younger by the year. With Millennials being the up-and-coming driving force between most organizations and teams, the workplace of the future will be increasingly shaped by millennial values.

However, a new generation taking over workforces isn’t something to be taken lightly. Millennials have very different ideas, expectations, and workplaces experiences than their older counterparts, which means what they expect of the organizations they work for diverges drastically from what we’re used to. Unlike previous generations, their aspirations typically include having meaningful, varied careers, rising quickly through the ranks, learning new things, and having greater autonomy than their predecessors. 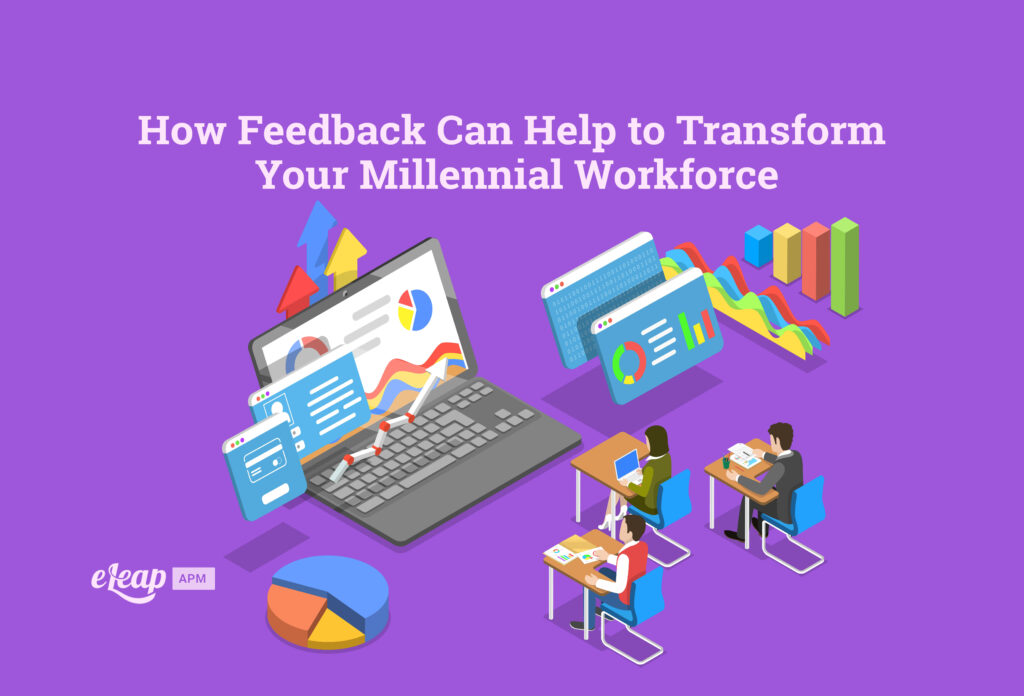 The younger generation can seem to be getting pickier about how and where they work Cash, bonuses, and pay raises aren’t the primary driving factor behind what motivates Millennial workers. Often, this can be difficult for leaders to understand, making it hard to sympathize with such demands. It’s also important for this generation to get enough feedback and to learn new things. Retaining and engaging Millennial employees and their expectations is critical for the future success of an organization, so employers would do well to consider their needs rather than dismissing them.

In the past, feedback was hugely dreaded by most employees, but Millennials actually thrive off feedback (when it’s delivered correctly, of course). In fact, about 50% more feedback is required to engage millennials than previous generations. Why is feedback so critical? First, we need to consider two factors that have had a significant impact on the millennial generation.

Why Is the Millennial Workforce So Different?

Firstly, we have to consider how differently Millennials were raised. Parenting styles tended to be much more attentive and hands-on than they were for baby boomers. More research into parenting over the years means that the millennial generation has, generally speaking, received more encouragement and attention than previous generations, when children were largely left to their own devices. Many Millennials were raised desiring a greater need for approval and appraisal than ever before.

Secondly, and not surprisingly, Millennials have spent a portion of their teen years and young adulthood growing up with social media being a constant presence. While older millennials reached adolescence as online culture became more popular, younger millennials experienced a huge social media boom. What does this have to do with how an organization is run? Well, one of the most impactful aspects of social media is continuous feedback from others as well as immediate gratification. With social media, one can share information instantly, send instant messages, and keep up to date on current news. Social media sites were largely created to maximize immediate and diverse reactions to everyday content. The more ubiquitous social media has become, and with its omnipresence in most Millennials lives, the more they have got used to immediate and constant feedback.

Moreover, exposure to social media also means that Millennials expect to connect with everyone, not just those who are close to them. Due to their personal insistence on swift feedback loops, it’s very understandable that they demand the same level of responsiveness from their place of work.

In addition to validation, feedback also includes stimulation and continuous learning. This has caused Millennials to develop a need within the workplace to feel as though they are constantly learning and growing. When utilized correctly within an organization, this Millennial workforce trait can be extremely beneficial.

Additionally, regular feedback has a direct bearing on employee engagement, and the most engaged millennials are the ones who meet with leaders to discuss their performance on a weekly basis. Unfortunately, far too many leaders are yet to catch on to this, and they don’t provide feedback nearly as regularly as they should to keep Millennial team members engaged. Because they rely on regular feedback, and thrive so heavily on it, leaders who don’t fulfill this desire are only alienating their Millennial employees, causing them to become disengaged and ultimately feeling unsatisfied in their jobs. What does that mean? Higher turnover rates!

This leads directly into the next point: employee retention. Since Millennials will soon make up the large majority of our workforces, organizations need to understand how to keep them around. Companies need to make sure one of their primary focuses is retaining the best young talent. This isn’t only because they’re such a significant percentage or workers, but also because Millennials better understand many organizations’ modern needs. For example, they’re usually more competent than their seasoned counterparts in areas such as social media presence and digital aptitude. This tech-literate younger generation can also be impatient, and they’re much more inclined to leave unfulfilling positions than previous generations. Gone are the days when workers would stick around in a job in which they feel unfulfilled simply because they’re being well-paid. The bad news is, Millennials won’t do that, which puts even greater emphasis on the need for organizations to understand what drives this generation and make the necessary adaptations to ensure they feel fulfilled.

Millennials are the ultimate tool for companies that put the work and effort into understand them and adjust better manage them. One of the most important things to remember is how much Millennials thrive off well-executed, regular, feedback. What does this mean? Companies should learn to value feedback highly, as well as provide it regularly and in the right way. In order to provide continuous, regular feedback to millennials, managers and HR departments need to be proactive rather than wait for them to ask. If your organization can master what makes Millennial’s tick in the workplace, you’ll be set for the future.