In performance management, few things are as critical as feedback. It’s not just the information that you provide to your employees, though. It’s also the way in which you deliver it, the atmosphere, the culture of your company, and so much more.

Sadly, despite the complexity and importance, too many managers whiff the ball. They’re too critical, too offhand, or too concerned with creating discomfort that they fail to give feedback at all. That’s no way to foster personal and professional growth, which is what your role is all about. 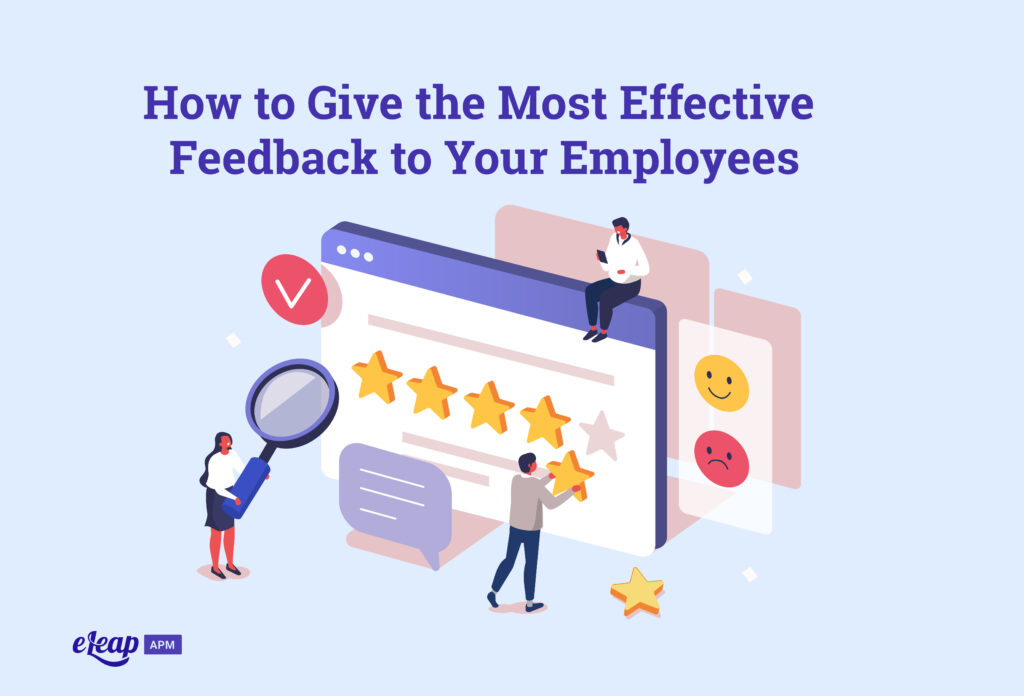 One of the most critical failures managers make is offering irrelevant, unsolicited advice. Did you know that only about one-third of the people who receive feedback say that it’s beneficial? Unsolicited, irrelevant feedback is like that – mostly useless. Giving feedback without it being asked for also creates tension and stress in the person receiving it. How do you fix that? Ask first.

It might seem strange that a manager might have to ask when they can give an employee feedback, but that’s the truth of the matter. If the other person hasn’t asked for help or guidance, ask them when, where, and how they would like to receive feedback. That empowers them – it puts them in the driver’s seat, if just for a moment. Usually, that’s enough to defuse the situation.

Come from a Place of Compassion

It’s understandable why feedback sometimes feels brusque, even harsh. You’re pressed for time and with your own responsibilities to handle. That can create pressure to get things over and done with quickly or even irritate that you have to stop what you’re doing to guide someone who should already know better.

Stop right there. Take a few breaths. Understand that if you’re giving feedback and it doesn’t come from a place of compassion, the other person is unlikely to listen.

How do you change the situation? It will require developing empathy for the person. That doesn’t mean pity or feeling bad for them. It means that you’re able to put yourself in that person’s shoes, see things from their perspective, and then come at the situation from that point.

When you’re able to deliver empathetic feedback from a place of compassion, it blunts the sting. It makes the message much more endurable, perhaps even optimistic.

Often, managers reserve feedback for situations where the employee is doing something incorrectly or where something has gone wrong. It’s corrective action. That’s normal and part of the job description, but if you limit yourself to only delivering negative, critical feedback, your team members are going to cringe every time they see you coming.

Instead, give both negative/corrective and positive feedback. When someone’s doing something great, tell them you appreciate it. When someone achieves something good, laud them for it.

However, don’t mix your messages. Combining corrective feedback with positive feedback is a mistake (and we’ll cover that in a separate tip below).

Leave the Sandwich for Lunch

There’s a feedback approach called “sandwiching”. Superficially, it seems like a great thing – you tell the employee something good, then provide corrective feedback, then bookend that with more positive feedback. It’s designed to soften the blow of whatever corrective feedback you have to give, but all it does is muddy the waters.

Instead, set aside times for both positive and negative feedback. If you need to provide corrective information, do so kindly and with empathy, but don’t confuse your workers by switching from positive to negative to positive again. Sandwiches might be great for lunch, but they should be avoided when it comes to employee feedback.

Private Feedback Should Be the Rule

It’s tempting to pull someone aside and give them feedback quickly, right there, just so you can both get on with your day. Unfortunately, when you do this in public, there’s a significant chance that others might overhear you. Even if they don’t, it’s humiliating to the employee.

The better option is to keep feedback private. Do it somewhere out of the way, with assurances of privacy. You might also want to consider doing it in writing, which can be even more private. By doing this, you help ensure that the employee can focus on your message rather than their discomfort and worry that others might see or hear what’s going on.

Keep It Focused on Performance

Finally, don’t make a feedback session a standalone instance. That shows that you don’t care – you’re just going through the motions. Instead, follow up with the employee later. If they’ve made improvements in their behavior, show appreciation, and be positive. If there’s still work to be done, note that, too. Following up shows that you care about their success and want them to perform well for their sake, not just “for the job”.

Bringing It All Together

The tips above will help you not only provide more effective feedback but to build stronger relationships. They can also help you begin to change negative corporate cultures for the better. Once upon a time, coarse, callous behavior was the norm, but today’s world is different. A compassionate, empathetic approach will not only help ensure that your employees happily perform at their peak, but will go a long way toward making your business an attractive employer for top talent.