No matter where you personally fall on the political spectrum, the late 2020 suspension of diversity training rules by the previous administration probably came as a surprise. That’s because, when you strip away all the rhetoric, diversity does a lot of good for the workplace. Without it, your business is crippled, unable to compete in the market as effectively, and likely not attracting top talent, either.

What does diversity really do for the workplace, though? Why is it such an important topic, and why does it have such an impact on performance, your ability to compete, and the cementing of your organization as an employer of choice within your industry?

In this post, we will explore the many benefits that diversity delivers to organizations both large and small. 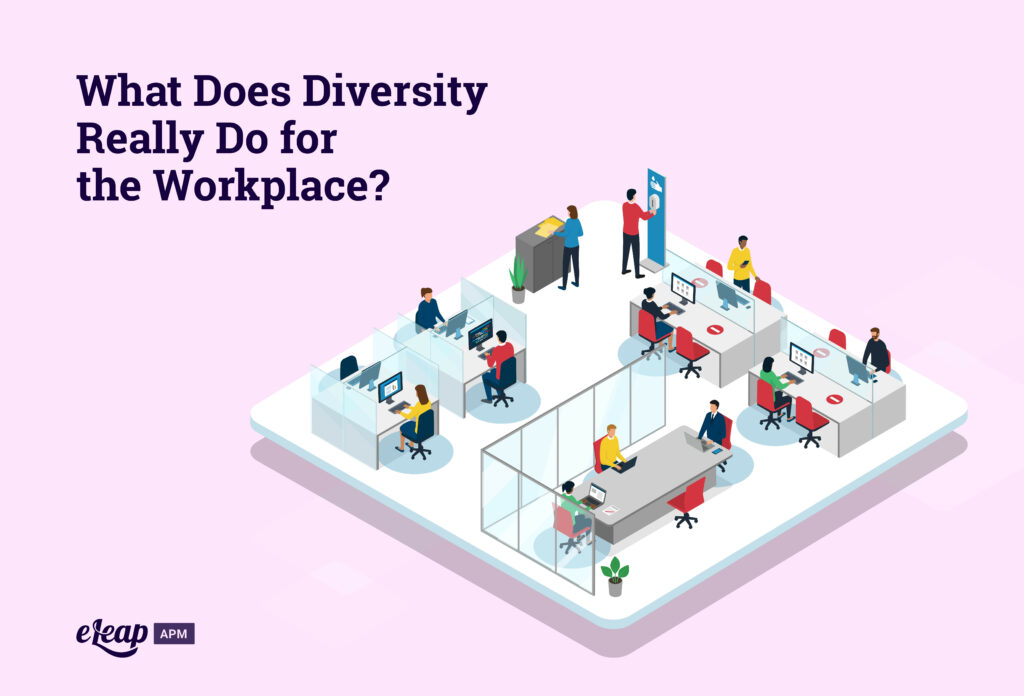 First, let’s address the misconception that diversity is somehow “new”. It’s not. We’ve always been diverse. From its inception, America has been a massive melting pot where people from all walks of life, cultures, ethnic backgrounds, religious and spiritual beliefs, come together as one.

So, put the idea that diversity is some newfangled idea and realize that it’s just a refocusing on what we have always been – stronger together.

What Does Diversity Mean?

We also need to tackle another misunderstanding. What is diversity? For such a small word, it is often confused with others. Diversity is nothing more or less than understanding and appreciating the differences in race, religion, gender, disability, sexual orientation, age, and education, as well as other variables.

Put simply, human beings differ from one another. Even two people who grew up at the same time in the same city in the same country can have wildly different perspectives and beliefs, backgrounds, and dreams. Diversity also presents in numerous ways within the workplace, including:

These are just a few examples of existing diversity. Those factors are there whether leaders choose to recognize and celebrate them or not. However, there are good reasons to focus on improving both the diversity and acceptance of those who differ from us.

What Diversity Brings to Businesses

Why focus on celebrating diversity? Why make it part of your performance management and employee development initiatives? Many reasons exist, but some of the most compelling include the following:

Another study indicates that if executives aligned business goals with diversity, it drove improved financial performance across the board. Finally, a third study found that companies with diverse leadership teams achieved innovation revenue totally 45% of total revenue. In comparison, those without a significant push for diversity only saw 26% of total revenue as innovation revenue.

In fact, the more diverse a workplace is, the more engaged employees will be across the board. It also reduces churn and boosts employee retention, which drives down costs and streamlines the path to success. After all, if you can retain engaged employees, it becomes easier to achieve real progress than if you are constantly having to stop, recruit, onboard, and train new employees.

Sales team and overall employee diversity can also drive different purchase decisions on the part of customers/clients. It has to do with several factors, including seeing themselves reflected in your company makeup (inclusion), and realizing that your company is making a concerted effort to where diversity is concerned.

Getting Your Team On Board

With a better understanding of the benefits offered by diversity, it’s now time to talk about how to get your team on board with it. That might be simpler than you think. For many, simply understanding the benefits we presented above will be enough. For others, though, you might need to take a different approach.

This should include not just promoting the benefits of inclusion, but celebrating inclusive behavior. When your team achieves success related to diversity, cheer them on. Point it out so that everyone can see and begin to understand. The converse is also true – it’s important to recognize when your business fails to achieve a goal.

It is also important that diversity becomes part of your performance management approach and your learning and development initiatives. Employees, particularly management and other leaders, should be scored on their acceptance and promotion of diversity, and all employees should complete diversity-related training through your LMS.

With a concerted approach, an understanding of the benefits, and the willingness to succeed, any business can reap the rewards of diversity and inclusivity.